The eye-catching Edgar haircut has been steadily rising in popularity. Below, we’ll explore exactly what the Edgar is and show you some of the most popular variations of it, along with a few things to consider before hitting the barber.

What Is the Edgar Haircut?

The Edgar haircut is a type of crop characterized by a high fade (often a high skin fade) and a neatly shaped section of short hair on top. It borrows elements from the Caesar, the French crop, and the classic undercut.

The Edgar is most closely related to the Caesar haircut. Essentially, an Edgar is a Caesar with high faded sides. The two fringe styles are almost identical, but the Edgar is definitely edgier than the Caesar.

While its origins are dubious, some believe the haircut is related to baseball player Edgar Martinez. A fan got Martinez’s face shaved into his head, and the resulting hairstyle (minus Martinez’s likeness) became somewhat infamous.

It seems to have its origins in Mexico, where it’s also known as the takuache hairstyle. “Takuache” is Spanish for “possum,” but it’s also a nickname for young Mexican men who love pickup trucks (and who tend to sport the Edgar haircut).

Now that you know all about the Edgar haircut, feast your eyes on 10 of the best Edgar hairstyles you can get. We’ll cover each one in detail so you know what to ask for before hitting the barber shop. We’re kicking off this list with the most classic version of the Edgar haircut. Also called the takuache hairstyle, the Edgar consists of a top that’s cropped almost like a bowl cut with a straight line going around the head.

The sides are then high faded for contrast, and the top is usually textured or styled. Here, the hair is styled forward to create a wavy look. Like the Caesar cut, the Edgar haircut uses a straight cut fringe. It’s a medium-length fringe, so it’s a little longer than a Caesar.

But by no means is it long. It’s also important to note that the fade starts out as a skin fade, meaning the section right above the ear is completely bald, and gradually tapers up to a high fade. That’s the classic Edgar haircut. One simple variation of the standard Edgar haircut is the scruffy Edgar, which ruffles up the hair a bit. Since the hair is so short, the messiness helps by adding volume and texture.

You don’t want the hair to be too messy, of course, but a little bit of tousling will go a long way. Other than the messy top, this is pretty much the classic Edgar, complete with the straight cut fringe and high faded sides.

However, the fade shown here is a little less extreme, though not by much, emphasizing that one of the keys to the Edgar is that dramatic fade. If texture is your number one priority, look no further than this highly textured take on the Edgar. This haircut relies on layering the hair in sections while also styling it forward (much like the classic Edgar pictured above).

Interestingly, this haircut uses a uniform fade that does not taper but stays the same length from the ear to the temple. Another benefit of this textured style is that it works well with almost any hair type.

So you can rock this even if you have fine, flat hair. For best results, use a bit of hair clay (or a similar texturizing product) along with a sea salt spray to maximize the amount of texture and add a bit of volume as well. The Edgar has many similarities to the new take on the bowl cut, and those similarities are on full display with this variation of the Edgar. Here, the hairline has a more jagged edge, which is often what you see in bowl cuts. However, the rest of the haircut is basically the classic Edgar.

As with the textured Edgar, this haircut has some nice texture on top that also provides a generous dose of volume and helps the haircut to (literally!) stick out a little more. The sharp bald fade draws the eye to and emphasizes the bowl line. If you like the all-around look of the Edgar haircut but want something a little less structured, consider opting for a more natural take on the style. The cut contoures the cuts to the hair’s natural patterns.

This gives you a much more natural look. Instead of a straight cut fringe, this style allows the hair to just fall forward, and the “bowl line” is almost wavy instead of being perfectly straight.

This haircut is a good option if you want something that’s a little more versatile. Although the straight cut lines are part of the Edgar look, you can still achieve the spirit of the style by going more natural. Got curly hair? No problem––the Edgar works with curly hair like it’s nothing. While curly hair can sometimes be tough to wrangle, it’s a good match for the Edgar because the style allows the hair to do its own thing.

In addition, the faded sides keep everything nice and tidy. Here, the fade is a high skin fade, which is a good choice for extremely curly hair. If your hair is only wavy or slightly curly, you could also opt for a more gradual fade.

The curly Edgar shown above is a touch longer than most Edgar haircuts, and if you have super curly hair, you might want to go for a longer style to show off that texture. Another small touch is that the fringe isn’t perfectly straight cut, but rather created by the hair falling forward. A widow’s peak is a source of insecurity for many men, but if you’re not afraid to flaunt it, you can actually use it to your advantage. Namely, you can work it into a hairstyle.

This makes it part of the look, instead of something that takes away from it. Here, the fringe is shaped along the hairline, resulting in a clean and natural look. Of course, the styling of the hair plays a big part here.

The hair is styled forward (as in some of the other styles on this list) to compensate for the peak and add a little more visual length. The very front of the fringe is also styled straight down to create a layer that adds more dimension to the hair’s appearance. The Edgar haircut can also be worn shorter if you so desire. This shorter variation takes inspiration from buzz cuts and other crop hairstyles, making it something of a hybrid haircut.

It takes the standard Edgar formula and changes it up a bit, especially with the natural fringe that’s not cut straight across. The longer fade also contributes to the fullness of this hairstyle.

Instead of using a high skin fade, this haircut uses a more gradual fade that never reaches skin level. If you want more contrast, however, you can absolutely ask for a high skin fade. Here’s a fun twist on the Edgar that’s much more angular. Most of the haircut is a standard Edgar, but the fringe is a whole different story. It sticks out in jagged chunks that jut out over the fringe line.

This creates a focal point that’s sure to draw attention. What’s nice about this style is that you can change up how it looks based on your hair type.

For example, if your hair is wavy instead of straight, you can allow a couple of wavy sections to hang down. It’s a versatile haircut that’s great if you’re after a casual style with a bit of edge to it. 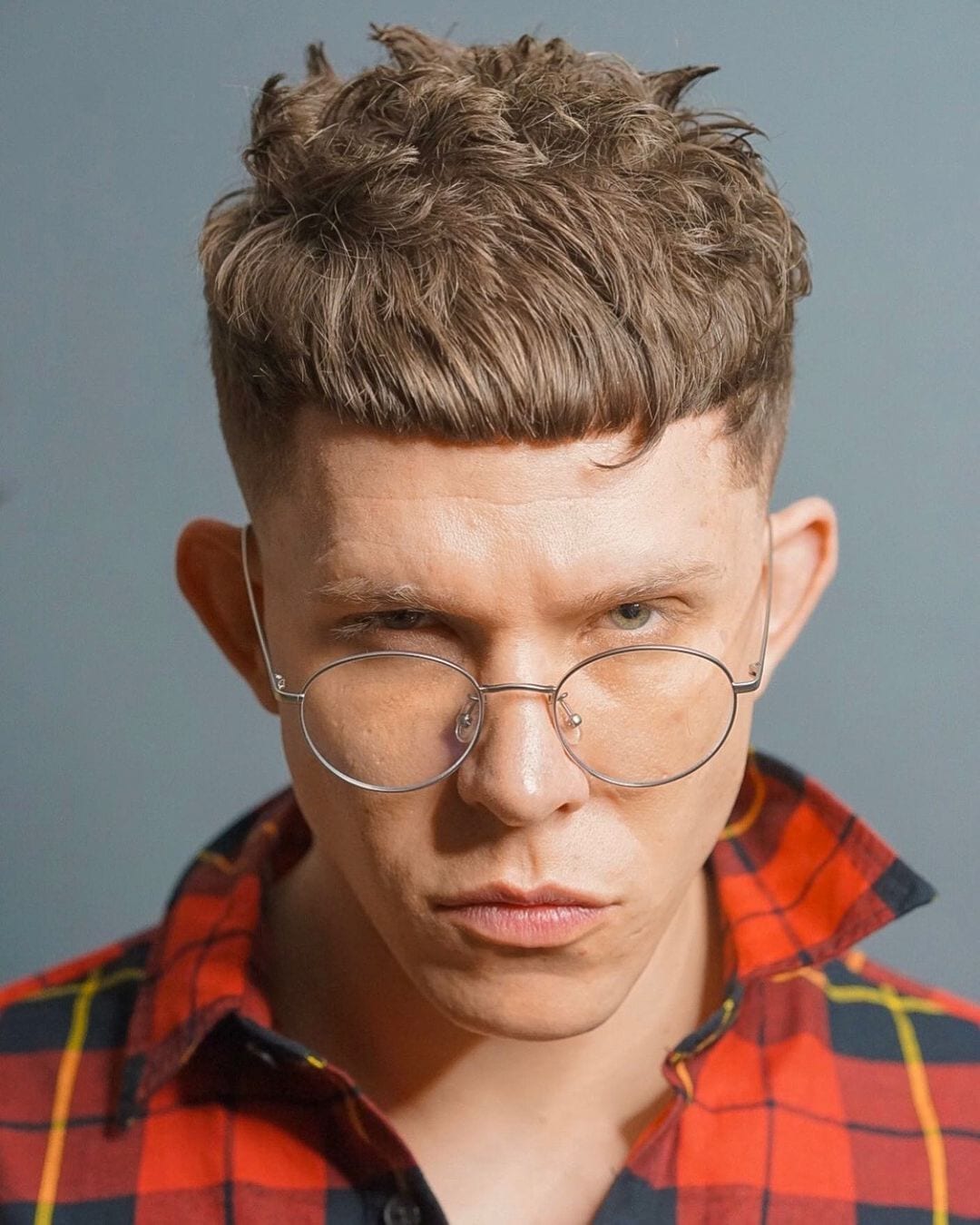 To wrap up this list, we’ve got this extremely experimental Edgar haircut that has a lot going on. The tousled texture, layering, and asymmetrical fringe all make this an eye-catching haircut that’s great for guys who like to sport more adventurous styles.

While the “fang” on the fringe stands out, it’s really the tousled and layered top that makes this hairstyle. The hair’s front and sides are neat while the top is messy, and juxtaposing all those textures results in a unique haircut that’s bold and edgy.

Should You Get an Edgar Haircut?

The Edgar haircut is a fantastic low-maintenance choice for men, and the ten styles showcased here are some of the best Edgar hairstyles you can get today. And while you’re here, be sure to check out our other style guides!

Why are people getting the Edgar haircut? People are getting the Edgar haircut because it's edgy and bold. It's also extremely practical and can be styled many ways. It also flatters pretty much all face shapes, so anyone can rock it with confidence.

What is the Edgar haircut called?

The Edgar haircut (also called "The Edgar" or "The Edgar Cut" is a bold style that's full of attitude and edge. Similar to a Caesar, it features a undercut combined with short sides, top, and back. We think it looks best when it's squared off and brushed, but it can be worn messy as well.

How to style the Edgar haircut?

The Edgar haircut can be styled many ways. The traditional Edgar looks like a bowl cut mixed with a Caesar cut, where the bangs are cut at the same length across the head. The different is in the sides and top. With an Edgar, the sides are typically shorter than the top, and many variations exist, including an undercut, taper, or fade.

Who started the Edgar haircut?

Baseball player Edgar Martinez started the Edgar haircut trend after a fan got Martinez's face shaved into his head. However, modern origins can be traced back to Mexico, where teenagers who love pickup trucks have been sporting the haircut for the last decade.

What Is The Edgar Haircut?

The Edgar haircut is a type of haircut often worn by Latino men that features a short back, short sides, and a long top. It's similar to a Caesar cut, but more like a bowl cut, with the hair being cropped straight around the entire head. The bangs are usually combed down and forward, covering the forehead. Edgar cuts are great because they don't need to be styled, as they're meant to look messy.

What does Edgar mean? When referring to the haircut, an Edgar is a style that found its way from the Latino truck culture into modern youth culture around the world. It's also known as  a "Takuache" cut, meaning "possum."