The crew cut is a classic men’s haircut that has passed the test of time. Learn all about this style and browse our curated lookbook below. We’ve rounded up 20 unique and timeless classic styles to rock in any decade.

What Is the Crew Cut? The basic crew cut is defined as a short hairstyle that tapers from the front, where the hair is 1-3 inches long, to the back. The sides are usually faded and blended into the hair on top.

The origins of the crew cut are somewhat murky. Versions of the style can be traced all the way back to the 18th century, when men could be seen with short, flat-topped pompadours. After the invention of electric clippers, the style changed quite dramatically.

The crew cut as we know it today seriously gained traction in the 1920s and 1930s. It was popular among college athletes, who would get the cut for practical reasons. The crew cut was short enough that they wouldn’t have to brush any hair out of their faces, and it also helped their heads stay cool during intense bouts of sport.

The style was especially popular among Ivy League students, which is why a long crew cut is known as an Ivy League. The crew cut also became a go-to haircut for men in the military, many of whom kept wearing the style after they returned to civilian life.

Today, the crew cut is a common choice for a low maintenance men’s hairstyle. Since it’s a classic, it looks great on most guys, and there are also many variations that build on the basic foundation.

Since the crew cut is such a simple style, there are countless variations of it. To help you out, we’ve selected a range of crew cuts for you to browse through. Let’s start by looking at the classic crew cut. If you waltz into an old-timey barbershop and ask for a crew cut, you’ll probably get something close to this.

The top is traditionally blended, and the sides are gradually faded for that 1940s vibe. Here, the hair in front is brushed forward, but it can also be brushed upward to create that mini pompadour. This is the contemporary standard crew cut, and you can instantly tell that it’s a modernized version of the classic.

Many of the elements here (like the sharp, gradual fade and cropped top) reflect the changes this hairstyle has gone through since it peaked in popularity in the mid-20th century. It’s a bold, fresh twist on the original style. While the original crew cut is quite clean, some contemporary variations take that cleanliness to a whole new level.

A razor-sharp skin fade, meticulously trimmed top, and carefully blended body all work together to create a crisp and tidy result. This is a great choice for professional guys who need a seriously spick-and-span style for the office. For those who prefer more casual hairstyles, this modern take on the crew cut has a lot to offer. It’s still a crew cut at heart, but it’s way more laid back.

The fringe is brushed forward and trimmed short, and the sides have a gentler fade. The hair is tousled just enough to finish off the look and complete the casual feel.

Read Next: Types of Fades Here’s a stylish combination of a crew cut on top with the short faded sides of an undercut. This haircut relies on two important elements.

The first is the added length on top, and the second is the type of fade. This style is longer on top than a typical crew cut, and the sides are faded without blending. The French crop is quite similar to the crew cut, and often the two get blended together to create a cropped crew cut like the one shown here.

This is most noticeable with the fringe, which is razor cut to create a slightly uneven line. And unlike a typical crew cut, the back is kept a little longer to allow for a fuller look. Another way to switch up the crew cut is to change the type of fade. Usually, a crew cut gets a pretty standard high fade, but you can pair it with all kinds of fades.

Here, the fade is an extreme skin fade that heavily contrasts with the hair on top. The fade blends the hair for about an inch and then ends abruptly a couple of inches above the ear. With longer crew cuts, you have the option of setting a side part into the hair. A subtle part can really freshen up this simple look, making it look less sporty and more gentlemanly.

It’s best to have a few inches on top so that the part can contrast the top and sides. If the top is too short, the contrast will be weaker. You can also go for a short crew cut by having the hair buzzed instead of scissor-trimmed. Similar to the military style crew cuts, the buzzed crew provides an incredible evenness while still allowing for small variations in length. Usually, these shorter styles will require a fairly high fade since there’s less hair to work with. If longer crew cuts are your thing, check out this side swept style that’s quite different from any of the crew cuts we’ve seen thus far. There’s a lot more length on top, which allows the hair to be styled to the side for a breezy vibe.

The rest of the haircut is more or less your usual crew cut fare. This is a nice option that allows you to have short, low-maintenance hair that you can still style. Here’s another take on the side swept crew cut that’s a bit neater. The hair is still brushed to the side, but it’s also blended for a much more subtle result. This is a good choice if you’re after a haircut that’s suitable for the office or the classroom. This haircut uniquely meshes the foundation of the crew cut with the contemporary spin on the bowl cut. With its cropped fringe, high skin fade, and tidy textures, this combination cut is unlike any other crew cut on this list.

And, of course, you get that unmistakable bowl cut hairline that continues all the way around the head for a rather satisfying result. Another classic crew cut look, this hairstyle is best for guys who want to look dapper. The hair is short but slicked and parted for a greaser-esque appearance that recalls the 1950s. The high skin fade adds a bit of a modern touch. 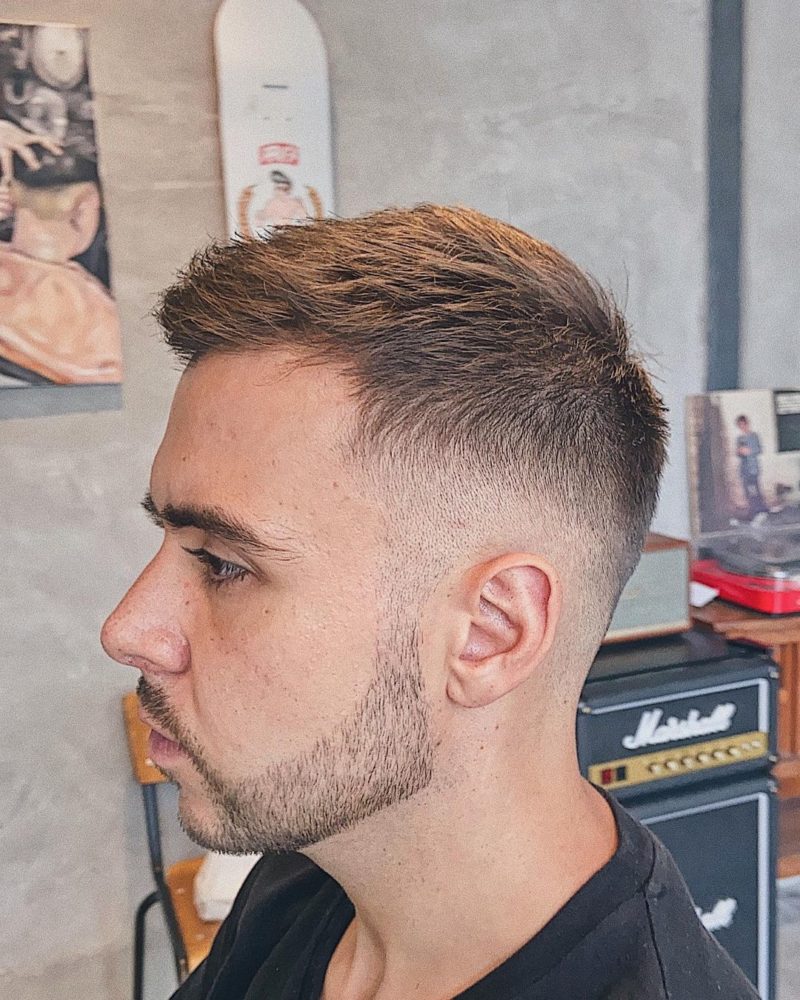 Crew cuts were invented back in the days of oil-based pomades, but today, guys have a lot more choices when it comes to what products they use and how it makes their hair look. Combine a crew cut with a matte finish product, and you’ll get a nice and casual result. Need proof that the crew cut is versatile? Check out this short and spiky variation. The two-toned hair is gently spiked to create a satisfying texture that shows off the dyed tips. It’s a simple yet impactful cut that proves you don’t need crazy hair to make a statement. This crew cut is ultra casual. The top is brushed forward, and the sides are drop faded—that’s it. Despite how carefree it looks, there’s also an elegance to it that makes this a true casual-meets-formal hairstyle. Here’s another take on the spiky crew cut that’s a little more low key. The spikes are more subtle and serve as a way to give the hair an overall textured look. This is another nice choice if you want a crew cut variation that allows for some unique styling. While the crew cut is usually associated with straight hair, it also works well with wavy hair. The wave is prevalent in the hair on top, and the faded sides draw even more attention to that texture. This is a casual twist on the buzzed crew cut. The general style of the crew cut is still there, but the buzzed hair creates softer lines with less contrast. If you like your hair to look full and thick, this is a good way to go.

The crew cut is a pretty straightforward style, and there’s not a whole lot to say about it. However, it is important to pay attention to the specific type of crew cut you want. If you just ask for a crew cut and use some loose terms, you might not get your desired result.

With that in mind, here are a few things to consider before you get your crew cut:

What number is a crew cut?

In most cases, a crew cut is no longer than a number four haircut. Because the cut is tapered from top to bottom, it's often a number one or two at the base of the head.

What's the difference between a crew cut and a buzz cut?

Generally speaking, a buzz cut and crew cut are the same, except a crew cut tapers, or fades, from top to bottom, while a buzzcut is usually one length on the sides and in the back.

Will I look good with a crew cut?

Yes. Most men look good with a crew cut. If you have a round face, you might want to limit the taper, as that could skew your proportions. But, generally speaking, most men can pull off a crew cut (and look good doing it, too).

The crew cut is a classic for a reason. It’s a simple, low-maintenance men’s hairstyle that suits just about any face shape and hair type. Plus, most crew cuts are great for both casual and formal situations, so you don’t have to worry about your hair being too wild.

Sure, trying out the latest trend can be fun, but there’s something to be said for the longevity of a style like the crew cut. If you need something straightforward and reliable, the crew cut will be there for you.