See the top 15 androgynous haircuts that perfectly strike the balance between masculine and feminine elements in our style guide. From edgy short looks to medium-length bobs, there’s a gender neutral option for you!

Thinking about getting an androgynous haircut? There’s no better way to bring masculine and feminine elements together in a visual way. That’s one of the reasons androgynous looks have taken the world by storm and are topping haircut trend lists everywhere.

As more people question the strict adherence to a traditionally masculine or feminine haircut (what’s the fun in that?) and explore more open-minded options, androgynous haircuts provide an easy way to cultivate looks that buck tradition – and look good while doing it.

Androgynous haircuts are like the physical incarnation of the Chinese yin and yang symbol.

The yin and yang symbol features interconnected, balanced opposites (indicated by the black and while color scheme) that remind us of how natural dualities – like light and darkness, fire and water, and femininity and masculinity – must be interconnected with their opposite or counterpart to achieve balance and wholeness.

Whether you’re looking to get more in touch with your feminine side or just want a nontraditional haircut that doesn’t broadcast your gender identity, we’ve got you covered in this style guide featuring 15 of the best gender neutral haircuts.

What Is an Androgynous Haircut?

Androgynous haircuts are a great option for non-binary, genderfluid, or binary folks who want to bring in both masculine and feminine elements to their hairstyle.

Androgynous cuts provide a way to play up or downplay specific features typically associated with masculine or feminine faces (like a strong jawline, prominent cheekbones, or rounded, full cheeks).

Basically, with an androgynous cut, you get to choose the balance between masculinity and femininity to suit your identity, mood, or look for the day. If you like to keep things open-ended or just want a less traditionally-masculine cut to soften your look, an androgynous cut is the answer.

If you’re considering trying an androgynous haircut to change your look, you can’t go wrong when you start with one of the most popular choices! We rounded up 15 examples of the trendiest androgynous styles for you to browse. Take a look and get inspired for your next gender neutral cut! 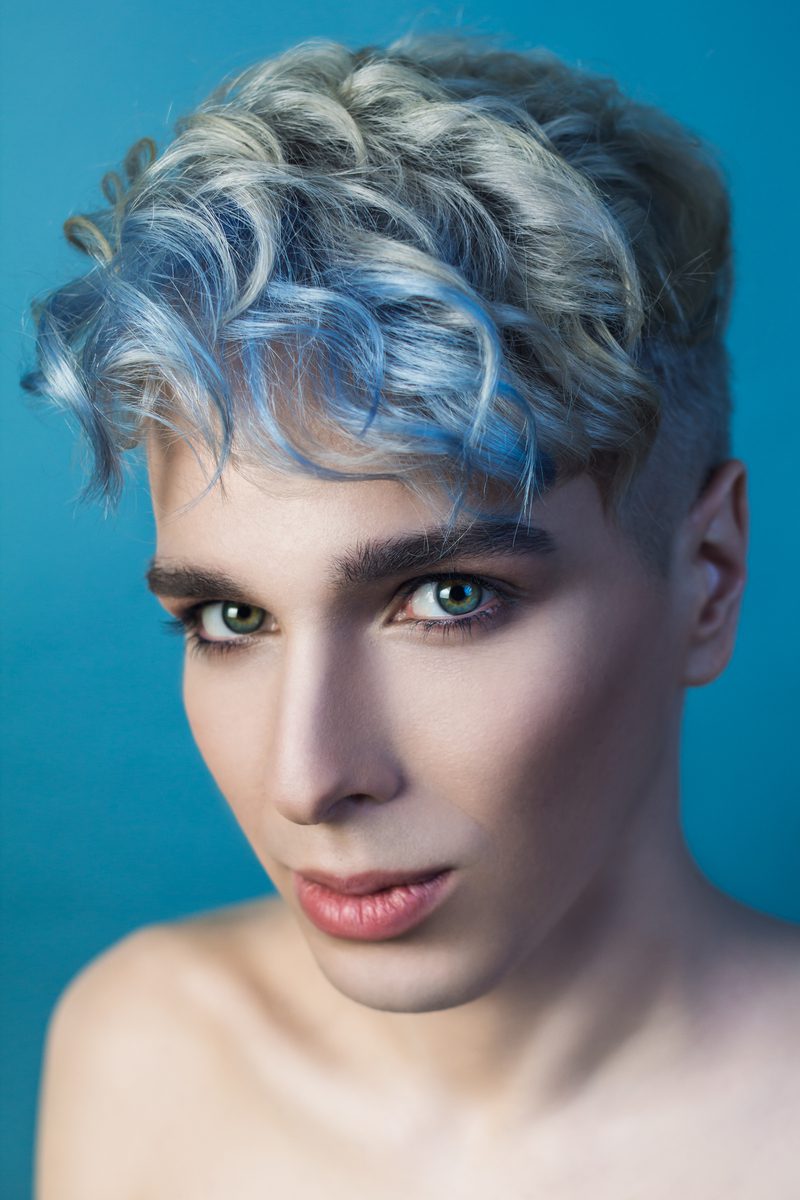 The two block haircut is typically worn by men, but we love the addition of traditionally feminine elements like the pop of vivid blue hue, perfectly arranged curls in the longer top, and striking silvery platinum color.

The long top/shaved back and sides in this cut make it simple to care for and maintain. The only part you’ll need to style is the long top. If you have a naturally wavy or curly hair texture, you can make this a great wash and go cut! Shoulder-length long bobs (lobs) are a favorite among androgynous cuts because they’re just so versatile. This cut allows you the freedom to style your longer locks sleek and straight, wavy, curly, or with a wind-blown, messy look as shown.

Long layers in the cut create nice variations in the length and give you more staggered levels of waves or curls if you want to style with texture. Here, a deep side part creates height and volume on top to soften angles in the face and lend a relaxed, feminine touch. Coily and kinky hair textures are perfect for androgynous, gender-neutral looks because you can do so much with them. Definition is the name of the game here, so you’ll need to use a curl product that defines and holds your coils to give this cut that feminine balance.

Bring in the masculine touch by leaving some pieces undefined and letting them adopt their natural shape. Having a skilled stylist with lots of experience cutting curly or coily hair is key.

You want a tapered cut that gets shorter toward the bottom to keep the cut lightweight and give your coils as much volume and bounce as possible. The pixie cut is a favorite androgynous option because of its built-in versatility. It’s not very long, so it can adopt a masculine vibe when you want.

Likewise, it’s not too short to allow for a wide range of styling possibilities from traditionally masculine/feminine and every identity in between. This makes this balanced pixie the perfect androgynous cut for any occasion.

Style the top brushed over to the side as shown, brush it forward to create a fringe look, or slick it back for something a little more debonair. The options are endless with this short and sassy cut! Curls make it so easy to transform nearly any traditionally masc style into something a little more genderfluid. Here, the hair is longer on top to allow the curl pattern to fully take shape.

The back is tapered in length and is shortest right above the neckline for a close-cropped look that follows the curves of the head. A burst fade cut in around the ears is the shortest area of the cut and gives the overall look an edgy twist. High fades may be seen most often as a masculine haircut, but when you combine it with a long pompadour on top, the look is softened and becomes a bit more balanced.

Instead of slicking the pompadour back with a boost of volume in front, try styling the pomp over to the side for an androgynous look that gives you tons of options depending on your preferred vibe or look for the day.

This kind of cut can look more masculine or feminine based on the rest of your outfit, so it’s truly versatile and won’t pigeonhole you into a single visual gender identity. The French bob is becoming one of the most popular androgynous haircuts because it really blurs the line between masculine and feminine. This bob is slightly shorter than chin length in the front to leave the strong jawline exposed and accentuated.

The center part, gentle waves, and longer length in back add soft feminine touches to the cut. Style it as shown with nearly symmetrical waves or try a side part and sleek, straight locks for a more masculine lean or bouncy ringlets for a more feminine look. A buzz cut immediately gives off a masculine vibe, but leaving the length slightly longer than is traditional really shakes the look up. Instead of cutting with the #1 or #2 clipper guard, try a #3 or #4 guard to leave the hair longer.

The longer your buzz cut is, the softer and fuzzier it’ll look and feel. While you can rock a buzz cut at any length and call it androgynous, we think this #3 buzz cut perfectly embodies elements of the masculine (short, all-over length) and feminine (softer, slightly longer length). Channel your inner pixie with a shapely, short haircut styled forward and side-swept to balance the sharp angles of the cut. Piece-y and perfectly face-framing, this universally flattering cut will draw attention to your eyes and nicely highlight your cheekbones for a less traditionally-masculine vibe.

Work some mousse through your damp hair and brush it forward from the crown, then over to the side as you get closer to the front hairline.

A little wax or pomade will help you achieve the pieciness of this pixie cut. Just coat your fingers with the pomade and pinch the ends of the face-framing pieces to nail it. This haircut looks great on a masculine or feminine face thanks to its two stark “zones”: The long hair on top and shaved, short back and sides. The length differences and buzzed back and sides provide the masc vibes while the platinum hue and carefully coiffed style balance it all with a touch of femininity.

Your stylist will use clippers to shave the back and sides to a short length – usually with a #1, #2, or #3 guard – up to the temple area or slightly below.

The top is left a few inches long for more styling possibilities. Here, the top is styled forward with a choppy, angular look that doesn’t quite fit into traditional gender roles but looks amazing.

Short Taper With Long Quiff and Side Part Tapered cuts get shorter toward the neckline, making them more lightweight and less bulky than one-length styles. This variation in length can be both masculine and feminine depending on how you style it.

With a long quiff boosted with extra volume in front and a deep side part, the effect here leans more feminine, but you can make this look purely androgynous by slicking the quiff back or breaking up the style with a messier texture. If you have natural curls, you can take advantage of their flirty feminine curves and fluid bends with an androgynous cut like this tapered crop. A tapered crop gets shorter toward the bottom and allows you to focus volume exactly where you want it.

Featuring stacked layers that boost volume around the cheekbone level, this cut makes your cheekbones more prominent while downplaying a strong jawline for a balanced, gender neutral look. Longer lengths may appear more feminine than masculine at first, but small androgynous elements in this cut bring it a little more balance between the two. Long layers break up the length and keep the ends lightweight and bendy for moveable, dynamic texture.

The sleekness of the strands combined with slight bend – not quite waves – in the hair give this cut an effortless vibe. Tuck the hair behind your ears to show off your defined jawline for a more masculine look, or wear with a center part and allow the front pieces to hang down and gently frame your face to soften it up. Pixie cuts are always a good go-to option for gender-neutral cuts that won’t tie you down to a single style or gendered look. Here, the longer top in the cut is brushed forward to form a forehead-covering fringe that perfectly flatters masculine square and oval faces.

Tapering the length on the sides and around the back keeps this cut sleek and following the curves of your face for a feminine balance. Shake up the style by trying it styled to the side, with a center part, or slicked back. Deep side parts lend a softer, more feminine touch to any pixie style. If you’re downplaying obviously masculine features like a strong, angular jaw or a prominent Adam’s apple, a long-top pixie cut like this is the best way to do it.

Style the long top over to the side with a deep side part that begins at the temple.

Use a little gel to keep the top off the forehead and keep your eyes as the central focus for this cut. The sides and back are shaved short for contrast, and it also makes this cut super easy to wash, style, and maintain.

If you want to adopt a more androgynous look or just want to find a new gender-neutral cut that flatters you, here are a few things you should keep in mind.

Which Androgynous Haircut Will You Rock?

Your haircut is one of the most visual ways you can communicate your identity and essence to the rest of the world. If you’re all about balance and creating a gender-neutral look, an androgynous haircut is exactly what you need.

Stay ahead of the game by choosing one of the trendy, androgynous cuts on our list for your next salon or barber shop visit – you’ll pay homage to the masculine and feminine essences in you while looking your best.