Ever wondered “What is the most common hair color?” Spoiler alert: It’s not brown. Find out the percentage of brown, black, blonde, and red hair around the globe and see the most common color in our quick, informative guide.

Is There Really a Common Hair Color? Humans have been fascinated with the variations and differences in natural hair color since the beginning of time. Meet enough people and you’ll see amazingly different shades of black, brown, red, blonde, and gray/white hair color.

But which color is the most common? And what’s the rarest hair color?

It’s hard to get a grasp on how common certain hair colors are today because bleach and hair dye are so pervasive. While we might see a lot of blonde and red hair color today, it’s clear that many people sporting these shades aren’t naturally blonde or red.

The same goes for brunette and black hair color, which are common dye choices in salons – especially in fall and winter months. With so much artificial hair color in the mix, it’s a challenge to visually assess which hair colors occur most often in nature.

We found ourselves wondering, “What is the most common hair color?” The info we found is surprising. We thought brown or brunette would be the most common color with blonde as the rarest, but our hypothesis was proven wrong.

We think you’ll find the results as interesting as we did! Keep reading to discover what the most common hair color is, the rarest hair colors, and see the percentages of each natural shade.

We’ll also talk about how hair color is determined by the amount and ratio of melanin – pigment – your body produces. Let’s start with the main question: What’s the most common hair color?

What Is the Most Common Hair Color? 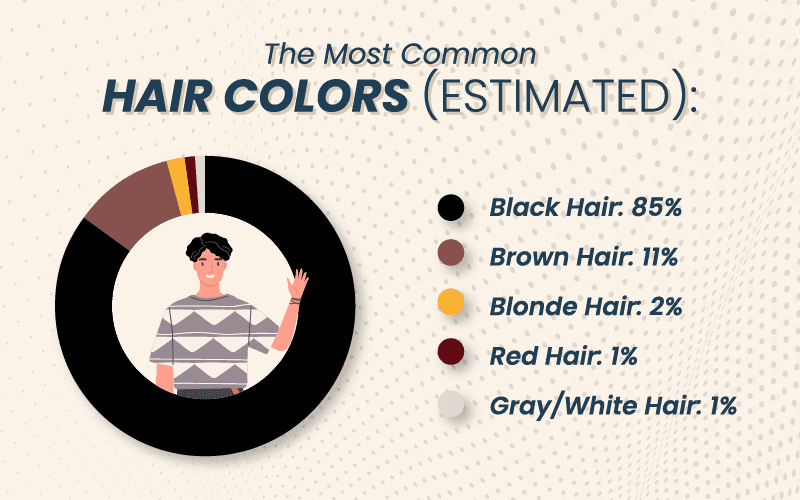 Black is the most common hair color worldwide. Estimates say anywhere from 75% to 85% of the world’s population has black or very dark brown hair.

This may come as a surprise to anyone living in the U.S., where only around 7.5% of women have black hair. But among high-population continents like Asia (4.6 billion people) and Africa (1.2 billion people), black hair color is the most common. Here’s a breakdown of the rest:

The Most Common Hair Colors (Estimated):

It’s easy to see how more instances of black hair in high-population areas would tip the scales and make black the most common hair color around the globe.

While black hair is most highly concentrated in Asian and African countries, it isn’t limited to these areas. Elsewhere in the world, you can find large numbers of people with naturally black hair.

But outside of Asia and Africa, black isn’t the most common natural hair color. Keep reading to see what the next most common hair colors are after black.

Still Curious? Click to Learn How Many Strands of Hair Are on a Head

How Common Is Each Hair Color?

There’s a ton of variation in natural hair colors. While we can group them with general terms (black, brown, blonde, red, etc.), millions of unique shades exist in humans around the world. Even black hair can have multiple shades and undertones!

Here’s what we found out about how common each hair color is globally. Black is the most common hair color worldwide, with somewhere between 75%-85% of people having a natural shade of black or very dark brown. There are several variations of black hair color, depending on the type and amount of eumelanin pigment in the hair (more on this in a bit).

It can be hard to differentiate between shades of black hair pigment without bright light. Some natural black color appears bluish or iridescent in the light, which many refer to as “raven black” or “blue-black.”

Other shades of black may look warm or slightly reddish under bright light. Natural black hair color is also associated with more hair density. People with naturally black hair tend to have more hairs per square inch on the scalp, so the hair usually appears very full and thick.

In Asia, natural black hair is also associated with a larger strand circumference or thickness. Since each strand is coarser, this adds to the overall thickness and fullness of black hair. Brown or brunette is the second most common hair color in the world. Estimates say about 11% of the global population has brown hair. In the United States, brown is the most common natural hair color.

The brown hair category includes a wide variety of shades that range from very dark brown (nearly black) to light brown (nearly blonde) depending on the amounts of eumelanin and pheomelanin pigments in the hair.

People with brown hair usually have medium-thick hair strands, with very few having fine or coarse strands. The average circumference of medium-thick strands is about that of a single thread. This means most brown-headed people will appear to have hair with normal thickness and fullness. Blonde hair is much rarer than both black and brown hair color. About 2-3% of the world’s population is blonde (sometimes spelled “blond”).

Blonde hair is not considered common in most areas of the globe.

In the countries with the highest blonde rates, the population is relatively low (like in Norway, Sweden, Denmark, Iceland, and Finland) compared to countries with high black or brown hair rates (like China and India). So overall we see fewer natural blondes than natural black-haired or brown-haired individuals.

An important thing to note here is that while natural blonde is relatively rare, it’s actually the most common artificial hair color. As many as 3 in 4 Caucasian women choose to dye their hair blonde at some point in time.

Significantly more women bleach/dye their hair blonde than any other hair color. So you probably see a higher ratio of blondes in your everyday life than the official 2-3% statistic! It’s clear that the rarity of blonde makes it more appealing to women looking to change up their natural hue. Red hair is the rarest natural hair color. Experts estimate that somewhere between 1-2% of the world’s population has red hair. Red hair is more common in Scotland than anywhere else in the world, where 13% of the population are redheads.

Red hair is known for the variance of its many shades. Red can be dark and mixed with brown hues (like in auburn hair), bright and orange-toned (copper), and even light and reddish blonde (strawberry blonde).

Red hair is rarer than blonde because it’s a recessive trait that occurs only when a person has 2 copies (one from each parent) of a mutated melanin-conversion (pigment changing) gene.

For a child to be born with red hair, both parents must carry and pass on a mutated version of the MC1R gene. If someone with red hair has a child with a brown-haired or black-haired person who carries the red hair gene mutation, the chances of producing a red-haired child are 25%.

That’s because the red hair gene is recessive and easily overtaken by the dominant dark hair genes. The child would need to receive a copy of both parents’ mutated red hair gene to display the physical trait. This gives you an idea of why the red hair color is so rare worldwide. Gray or white hair is most commonly seen in aging people whose natural hair pigment level drops significantly and results in a lack of regular pigmentation. It’s very rare for people to be born with white hair, but there are a few instances where this occurs.

Piebaldism is a melanocyte (pigment cell) disorder that results in a section of white hair and/or skin at the front hairline. Less than 1 in every 20,000 people worldwide have this disorder.

Albinism, a lack of pigmentation in the hair, skin, and eyes, occurs in about 1 in every 20,000 people worldwide. Either of these conditions can result in colorless white or grayish hair appearing from birth, but both are very rare

Read Next: What Causes Grey Hair?

How Hair Color Is Determined

Now that you’ve seen how common the different hair colors are and what the most common hair color is, let’s take a more in-depth look at what’s going on behind the scenes to create and determine hair color.

This will help you understand why certain hair colors are more or less common than others.

In general, there are 2 types of melanin – the pigment that determines your hair color – that combine in different ways to determine what your actual hair color and shade will be. They are:

The hair color you see is the product of how much eumelanin (dark) and pheomelanin (light, reddish) pigment you have in each strand. The higher your percentage of black or brown eumelanin, the darker your hair will be.

The higher your percentage of pheomelanin, the lighter your hair will be.

Every strand of human hair has both eumelanin, whether it’s the black or lighter brown version, and pheomelanin. Even very light blonde hair has some of the brown eumelanin pigment, and even jet-black hair contains some pheomelanin.

These melanin concentrations also affect the color of the eyes and skin. People with more of the dark eumelanin pigment tend to have darker eyes and can have a darker skin color (but not always).

People with an increased percentage of pheomelanin (blondes and redheads) tend to have lighter eyes and skin color, but again, there are exceptions. Genetics and environmental factors are complicated! We’ve looked at the most common hair colors, global statistics on hair color in different countries, and how different ratios of the two types of melanin determine overall hair color.

Let’s sum it all up by taking a quick look at the rarest hair colors ranked in order. We’re using a helpful clothing analogy to bring it all together. Here, the recessive red hair gene is likened to a tank top, recessive blonde genes to a t-shirt, and dominant black or brown genes to a jacket.

What’s the Most Common Hair Color in the World? The dominance of the black hair gene is what makes this the most common hair color in the world. The same is true for brown hair, which is the second most common.

Blonde and red hair, the rarest hair colors in the world, are so rare because they are recessive traits that are easily “covered up” by a single dominant black or brown hair gene. It takes two parents that both carry a recessive blonde hair gene or mutated red hair gene to result in a child with blonde or red hair.

We hope you’ve discovered some interesting info in this short guide!

Next time you think about coloring your hair, consider the physical wonder and complexity of what happened at a microscopic level to create your natural color. You just might find yourself appreciating your natural hue a little more – even if you’re starting to see hints of silver or white!