Interested in haircut lines designs? You’re in the right place. This unique method of cutting hair offers many options, and it’s a great way to express your personality or stand out. Read on to see 15 trendy styles for 2023.

What Are Haircut Lines Designs?

As the name suggests, these are haircuts that have line-based designs in them. This is done by shaving lines into the hair.

This technique can be used to create everything from simple notches to intricate patterns and even portraits. It requires short hair, so it’s usually done on the sides, but it can be done anywhere on the head if you have a shorter style like a buzz cut.

This might not be for everyone, but it has a streetwise edginess to it that is very complementary to certain styles. If you enjoy the streetwear vibe, then you’re probably going to like this hairstyle.

It works with almost all types of hair as long as the hair is short enough. There are also many ways to utilize this technique.

You can go all out or keep it subtle—the choice is up to you. Let’s talk about maintaining this look. As the hair grows out, the lines will fill in, so if you want to keep a line design, you’ll need to visit your barber or stylist for regular trims.

Ideally, the shaved lines will be completely free of hair for contrast. The hair can grow out a little, but getting the hair trimmed consistently is crucial to keeping this look.

Now that you’ve got the basics of this bold hairstyle, let’s take a look at some examples. Check out these 15 examples of haircut lines designs! Let’s start out simple. You don’t have to go all crazy and get a detailed picture to have a cool haircut line design. In fact, one line can go a long way, and this haircut proves that.

It’s literally just one line, but it does a lot for the hair. This is a longer hairstyle, so the line helps to provide contrast and makes the sides stand out. It gives a similar effect to a hard part, and it can give any haircut a bit of an edge.

While this works well with long hairstyles, it can also work well with short ones. Generally speaking, as long as you have some contrast between the top and sides, a line will stick out nicely. This is even simpler than a shaved line. It’s just a shaved notch. Even though this seems subtle, it can pack a punch because it contrasts so heavily and pops right out. There are many places to put it.

And here it’s placed at the back of the head right where the top and sides meet. It works great with dark hair because of that contrast, but depending on your hair color, type, and style, you have different options for placement. Of course, we have to follow up with a double notch. This is a slightly more noticeable way of doing a notch, so if you want a prominent design that’s still on the subtle side, this is a good option for you. These notches are placed at the front of the sides, just below the temple.

They’re larger notches that get smaller as they reach the front of the head, though you can also go for notches that are just one width. The change in width, however, adds a neat dynamic aspect. The term here “disconnected” refers to a technique that uses a shaved line to disconnect the top and the sides. In many cases, the line that disconnects the hair is the focal point, which puts it under our category of lines designs.

This particular style is a disconnected haircut with a thicker line that happens just above the fade on the sides. There’s also a little slash at the end of the line that points toward the ear, creating an interesting angle. Here’s another disconnected hairstyle that offers a different vibe. This one’s a disconnected crop that features a messy bowl cut on top and a sharp fade on the sides.

The disconnected line grows in width as it reaches the front of the head, and that change in size is a cool way to change up the hairstyle.

It’s not that obvious, but it looks much different from a completely straight line. This has heavy futuristic vibes, and if your style is inspired by techno raves and streetwear, this could be a perfect fit. But this one is comfortably on the side. However, it still does the same job of separating the longer top from the faded sides.

And, while they’re not quite lines, the two fangs in front create a similar effect. They separate the fringe and add a ton of visual interest, so that’s another option to consider if you want a different look or texture. This interesting haircut lines design is based on a unique concept of connecting the hair on top of the head and the beard. The line wraps around the head and is continued in the beard, which creates a nice effect.

You can also modify this style. For example, you can do it with multiple lines, or you can do it with lines that are shaped differently. That said, less is probably more here, as the subtle effect works best when it’s simpler and easier to see. 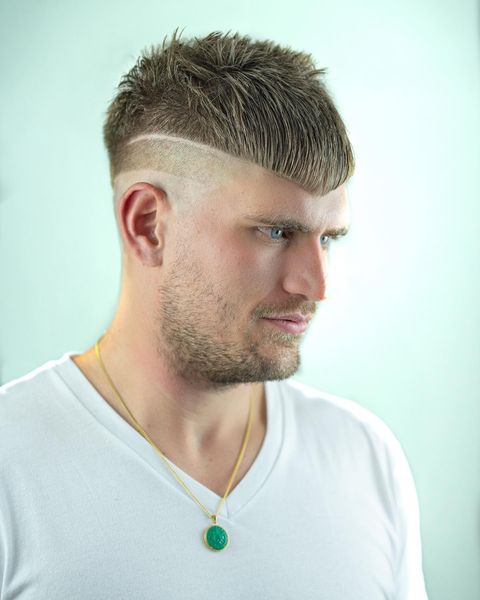 This one is a simple curved line that follows a gentle curve from the back to the front. This culminates in the fringe, which is shaped like an arrow, but the curved line style will work with a range of haircuts.

Another interesting aspect is that the hair is faded to emphasize the curve. There are three distinct sections: the bald line, the strip of faded hair, and the bald section just above the ear. This is a cool way to get texture. Okay, let’s look at something that’s a little more on the wild side. This is a curly zigzag pattern that goes from the front of the head to just past the ear. It consists of both sharp and curved lines, so it’s a really eye-catching pattern.

The dyed hair also helps this bold pattern to pop out and come to life. No doubt inspired by graffiti, this lines design is best for guys who want an edgy and unique flair to their hair. This Z-shaped pattern is another take on the zigzag that’s similar to the character Zorro’s calling card. It’s a striking Z with long lines that decorate the back of the head.

The design itself is quite loud, but the placement makes it more reserved. This is a fun way to add a dash of style to your hair without going too extreme. The top line of the Z looks like it starts at the ear, creating a satisfying look. On their own, these two techniques are fairly standard, but put them together and you get an angular style that’s noticeably defined by its lines. You can also use a shaved line to cleanly separate different lengths in a fade. Here the line forms a boundary between longer faded hair above and shorter faded hair below.

It’s a clever and neat way of incorporating a line design into an otherwise “normal” hairstyle. Despite the line being quite long and thick, it’s not as noticeable as you’d think. Instead, it blends into the style and becomes a part of it. This haircut line design takes its inspiration from a drop fade, which is when the line of a fade “drops” below the ear. The shaved line has the same trajectory as a drop fade.

And since it’s used to separate fade lengths, you do actually get a drop fade as well. This is another pretty understated way of doing a line design that adds just enough spice to the hair to make it different. Haircut lines designs are also great for kids, as they’re a super cute way of expressing youthful energy. This style for little ones features a sharp S shape that goes from the front of the head to the back.

The S is paired with a short and gradual fade so that it sticks out and contrasts. These simple sorts of zigzags are nice for kids because they’re fun but not too crazy. As a plus, designs like this will be okay for many schools. Last but certainly not least, here’s a line design that’s not for the faint of heart. It’s a huge curved line (almost an inch thick!) that follows the contour of the ear.

This creates a defined semicircle of faded hair below the line. This is a good choice if you want a line design that stands out from the rest and emphasizes the contrast in your hair.

A nice touch is that the line isn’t completely shaved. There’s a little bit of hair left in the middle to add depth and dimension to the design.

Alright, now we need to talk about some things to keep in mind when thinking about getting a haircut line design. Obviously, lines designs aren’t going to be for everyone. That’s a given.

But even if you think it’s right for you, there are some things you’ll want to consider before rushing off to get one:

And that does it for our article on haircut lines designs. These can be really fun, but you have to make sure they’re for you. We hope this list has given you the dose of inspiration you needed, and maybe it’s even helped you make up your mind.