The French crop is a men’s hairstyle that is becoming more popular by the month. We’ll show you 25 examples of this trending and classic cut, what it is, and how to style it in our complete guide below.

What Is the French Crop Haircut?

A French crop is a men’s hairstyle characterized by short sides and a shorter top with a cropped fringe. It’s similar to the Caesar Cut, but it stands apart thanks to its defined lines and fringe.

The sides are often faded quite heavily, so you usually see a lot of skin fades (or bald fades). However, some variations feature scissor-cut sides that are slightly longer. In both cases, the sides are fairly short, giving it a “cropped” style.

The hair on top typically has a pronounced line like a bowl cut, and this line extends to the fringe and goes around the head.

Now that you know what a French Crop is, let’s take a look at 25 of the trendiest styles of 2023: First up is the standard French crop. This has all of the elements that make this style unique: the short top, the “bowl” line, the cropped fringe, and the faded sides.

This one has an extra short fade on the sides, and that’s pretty typical with French crop hairstyles, though of course you can go a little longer. Some guys like squeaky clean hairstyles that look neat and tidy. If you’re one of those, then check out this tight French crop that’s cleaned up around the edges.

It’s also shorter than the standard crop to emphasize the neatness. Finally, the sides have a high skin fade that add a touch of class. 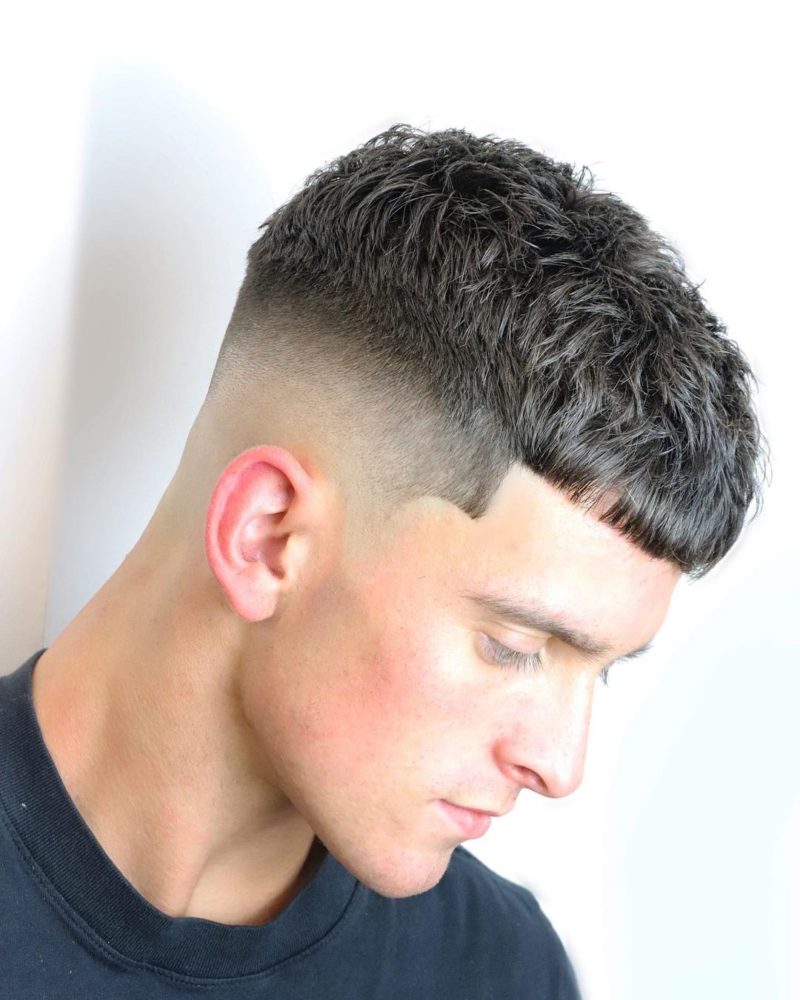 One popular French crop variation is the textured crop, which features a longer top with large amounts of texture. The top is basically the only aspect that changes here.

The fringe and sides are more or less the same. This is best with curly or extremely wavy hair that can naturally hold a lot of texture. This take on the crop is a variation of the Edgar haircut, which is normally a controversial hairstyle that’s also called the takuache. This crop takes the Edgar hairstyle and brings it back a little to create a sort of hybrid style that adds a bit of edginess onto a standard textured crop. This way of doing a textured crop is a little neater than the previous style, and it has a very different vibe as a result. There’s still a nice amount of texture in the hair.

But it’s not as tousled as the other textured styles we’ve looked at, so it’s a good choice if you want something more subtle. If neatness is your number one priority, this is the French crop for you. It’s an extremely neat and polished crop that doesn’t have a single hair out of place. The top is kept neat thanks to how short it is, and the high fade keeps the sides in check. The length of a French crop varies, and even small differences in length will give you fairly different results. Take this shorter crop for an example.

This is only a little shorter than a standard crop, but it looks quite different. The fringe is also noticeably shorter, so this looks more edgy than classic. This style combines the messy texture of a shag haircut with the shape and style of a French crop. The result is a shaggy crop that still has a defined fringe and line. The hair on top has a ton of texture, and there’s also a good amount of volume to create the shag-esque look. Can’t decide between neat or messy hair? Well, you can have both with this frizzy crop that’s neat in the front and on the sides and messy on the top. The fringe and sides are normally styled in French crop fashion, but the top is tousled a bit for a straw-like texture. Some French crops will be less angular and instead have more rounded lines that give the hair a softer appearance. This is an example of a rounded off crop that has gentler lines and a more curved fringe. It’s also heavily inspired by modern bowl cuts. Why not combine a mullet and a crop? This daring combination pairs an 80s-style mullet with a long and messy French crop for a unique style that gives you that “rolled out of bed” look. This French crop takes the normal textured crop and shortens it to create a tidy yet interesting hairstyle. The fringe is short and farther up on the head to keep everything proportional. This is a nice choice for a low maintenance men’s hairstyle. Here’s another way to change up the fringe on a crop in a way that transforms the hairstyle. The fringe is cut and shaped into jagged, asymmetrical pieces that fall past the hairline. You can get creative with how the fringe looks to create all kinds of hairstyles. This takes the normal French crop hairstyle and adds a few refinements onto it. The top is very lightly textured, while the sides get a high fade that makes everything nice and even. Since it’s so refined, this is definitely a more formal French crop. This French crop features a drop fade, where the line of faded hair drops below the ear, for a bit of a twist on the normal crop look. The short fade right below the line helps the unique shape of this hairstyle to pop out. If you like your crops on the messier side, you’ll enjoy this one. It’s a tousled crop with a messy fringe that has a punk vibe to it. Again, a short and immediate fade creates a ton of contrast for an eye-catching final look. French crops also look great with wavy hair! The waves add a nice texture to the top that complements the cropped shape. Best of all, you can lean into your hair’s wavy nature for a crop that’s unique to you. This is another crop style that’s good for guys who want just a little bit of texture on top but not enough to be super noticeable. Because the hair only has a light amount of texture, this crop style looks really clean. This crop is short but voluminous, so the hair on top is quite thick and fluffy. This creates texture you can’t get with flatter hair, and it’s a style that lends itself well to thick and wavy hair that’s naturally textured. This haircut takes the French crop style and adds a healthy dose of messiness to it. The fringe is much longer and less cropped, but it’s loosely cropped to provide a similar look. This is a great choice if you like the French crop but want something more laid-back. Yes, the French crop even works well with curly hair! The main difference here is the fringe, which is grown out and natural instead of being cropped. This is because it’s much harder to control curly hair, so it generally looks better when it’s allowed to hang naturally. Here’s an example of a French crop with slightly wavy hair. The gentle waves add a nice and subtle texture to the style, and there’s a good amount of volume on top to provide additional texture and dimension. This French crop takes style inspiration from loose, beachy looks that are heavily textured. The hair is extra voluminous and styled in tufts that create a large amount of movement.

The fringe is squared off instead of rounded, but the hair follows typical French crop dimensions for the most part. If your hair has a lot of fine texture, you’ll be able to get a sharp crop like this one. The hair is neatly combed into place, and while it’s not that messy, there’s a lot of micro-texture created by the styling of the hair.

Thinking about getting a French crop? Well, you can’t really go wrong with this style. But there are still some things to think about before getting one:

All in all, the French crop is a classic for a reason. It’s become especially popular because it’s a nice blend of classic and modern that has just enough edginess to it. Thinking about getting one yourself?