You are here: Home / Hair Care / Does Developer Lighten Hair? | Yes, It Does!

Developers are an important part of dying your hair, but you don’t necessarily have to mix them with color to get a striking effect. But does developer lighten hair? In short, yes it does. Read on to learn how to use it.

Yes. Developer on its own does lighten hair, and the technique is often safer and gentler than using bleach products. Developers, also known as activators, are an important component in the hair dying process.

It lifts the hair cuticle, allowing dyes to penetrate deep into the core and leave bright, permanent color. Different developers offer varying amounts of lift, defined as “volume,” based on how much hydrogen peroxide they contain:

If you want to brighten your locks without causing damage, using a developer alone may give you the look you want. Read on to learn more about how developers can help you lighten your hair safely.

The strength of a developer, also known as its volume, depends on much hydrogen peroxide the solution contains. There are four main volumes of developer that you can find, ranging from 3% to 12% peroxide. It’s important to choose the right type for your hair and your treatment plan to get the look you want. 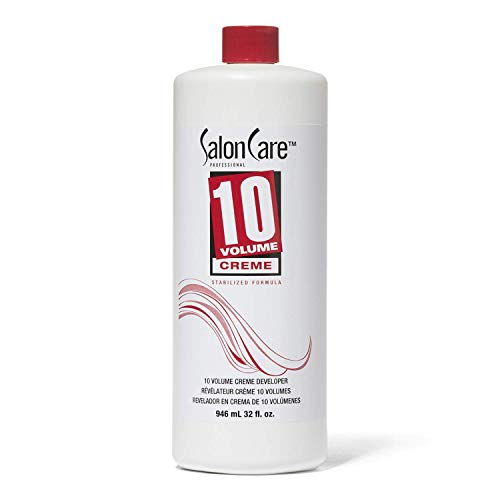 Salon Care 10 Volume Creme Developer Check Latest Price
We may earn a commission when you click this link, at no extra cost to you.

If you want a very subtle brightening effect, you may want to consider treating daily with a 10 developer for a week or so. You can slowly and progressively lighten your hair without worrying about excessive damage to the cuticle. 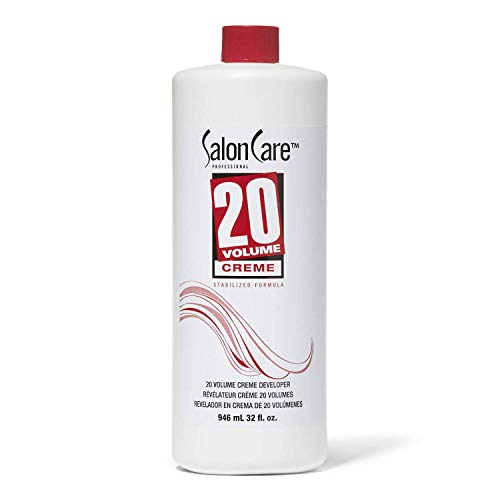 Salon Care 20 Volume Creme Developer, 32oz Check Latest Price
We may earn a commission when you click this link, at no extra cost to you.

It’s more common to see a 20 volume developer used to lighten hair up to one or two shades. It has a 6% peroxide content, making it twice as strong as 10 developer products.

Even without bleach, 20 volume developers can lift you between colors. For example, it can turn a light, level 5 brown, up to a dark, level 6 honey blonde. 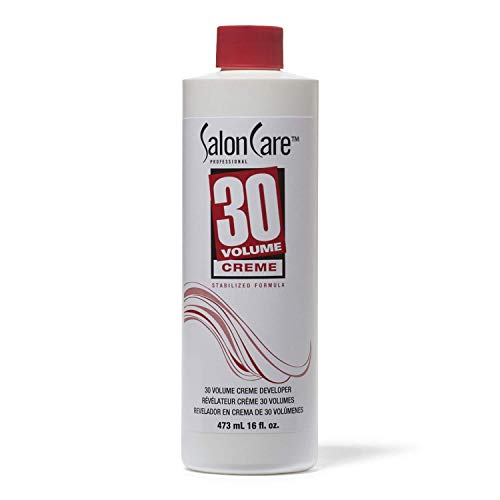 Salon Care 30 Volume Creme Developer Check Latest Price
We may earn a commission when you click this link, at no extra cost to you.

With a peroxide content of 9%, 30 developer is even stronger than 10 or 20 and can lift your hair up to four color levels. People who want dramatic lightening without using bleach often turn to 30 developers, as they offer a more gentle treatment option.

However, it’s essential to keep in mind that the high peroxide content in a 30 developer can still damage hair, especially if left on for longer than recommended. 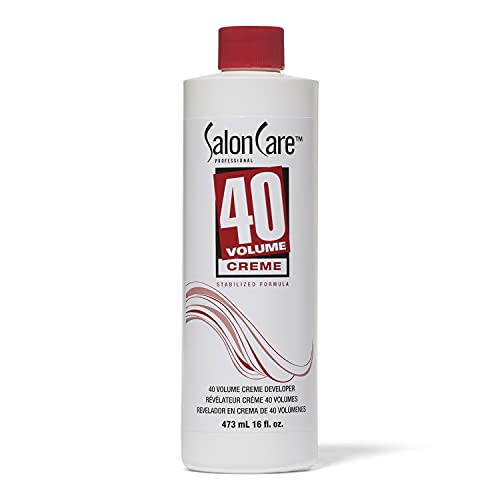 Salon Care 40 Volume Creme Developer, 16 oz Check Latest Price
We may earn a commission when you click this link, at no extra cost to you.

Developers in the 40 volume range contain 12% peroxide, making them more dangerous for your hair and scalp than other developers.

Most hair care experts don’t recommend using anything higher than a 30 developer in your DIY routine. Instead, it’s best to see a trained stylist when lightening more than five color levels.

Using a developer on its own is an easy DIY solution for lighter hair. Depending on how many levels you want to lift, you can choose between a 10, 20, or 30 volume developer. Simply work the product into your hair and allow it to sit for the recommended time.

Always make sure to moisturize your hair with a deep conditioning treatment or hydrating mask afterward to protect strands against damage. If you find that developer on its own isn’t enough to lighten your hair, you may want to try combining it with baking soda.

The peroxide reacts with the sodium bicarbonate to lift and lighten more effectively. You can also go the more traditional route and mix developer with bleach powder for a more noticeable effect.

While developers are typically safer and gentler than lightening with bleach, using them doesn’t come without risks, so it’s essential to consider the risks of using developers before adding them to your hair care routine.

Here, we’re going to go over some of the most common questions people have when lightening their hair with a developer.

What happens if you put just a developer in your hair?

If you put a developer in your hair without any additional bleach, it will gently lift and lighten the color without causing too dramatic of a change. If you’re worried that bleach is too harsh or will lighten your hair too much, you may want to try using developer by itself. Developers used alone will not change the color of your hair. While it may lighten strands, they will remain close to their original tone. If you want to dye your hair a different color, whether lighter or darker, you need to use a developer in combination with color.

How can I lighten my hair with a developer at home?

It’s easy to lighten your hair with a developer from the comfort of your own bathroom. Remember to wear disposable gloves to protect your hands when working, as developers can be harsh on the skin. It’s essential to choose a developer that’s appropriate for your hair type. When in doubt, always go with something gentle before working your way to more intense lightening treatments. Apply developer to damp hair according to the directions, then allow it to sit for up to 30 minutes. It’s a good idea to check the color at five-minute intervals to ensure you don’t lighten too much.

Can you remove hair color with a developer?

If you don’t like your new color after dying your hair, you may be able to do some damage control with the help of a good developer. Mixing a 10 to 20 developer can help remove semi-permanent color, while volume 30 products can strip away permanent dyes.

How long can you leave a developer on your hair?

You shouldn’t leave a developer on your hair for any longer than 30 minutes. After that point, the peroxide may cause irreparable damage to hair strands and even burn the scalp. Ten to twenty minutes of treatment yields bright, natural-looking results for most people.

The volume of the developer that you use will depend mainly on how many levels you want to lighten your hair. If you’re just looking for a bit of lift, you should use a 10 developer with a low peroxide content. A 20 developer, on the other hand, will lighten your hair up to two levels for a more dramatic effect.

So, Does Developer Lighten Hair?

So, does developer lighten hair? The short answer is yes, it does. Developers offer a safe and gentle way to create an all-new look if you want to lighten your hair. With the right volume developer, you can achieve a natural-looking lift without worrying about excessive damage.

Andrew Helling is the founder and editor of You Probably Need a Haircut. He graduated from the University of Nebraska at Omaha where he obtained a Finance and Banking degree. Andrew puts his creative mind to work by making platforms that make your life easier.