1800s hairstyles come in a many styles, but there are a few common trends. In this article, we’re going to look at what hair was like in the 19th Century and discuss some of the most popular styles.

The History of 1800s Hairstyles The 1800s were an interesting time for hair and fashion in general. Many cultural changes were occurring, and Europe and America alike saw many integral style periods, all of which gave birth to hairstyles of their own.

During the 1800s, fashion, as we know it in a modern sense, really took off. There was a greater emphasis on casual style (as opposed to the stiff, aristocratic style that had dominated the previous century).

And more people dressed to express themselves, which was a quite new idea at the time. Of course, hairstyles were greatly affected by all of this. Whereas the 1700s made wigs popular, the 1800s took inspiration from the classical period.

It was common to see tied-up buns, side parts, and layered cuts, many of which aren’t too different from their contemporary counterparts. A lot of hair influence came out of the Victorian era, a period where men and women alike were returning to more modest and practical hairstyles.

Many of these hairstyles, such as the chignon bun, are still around today, though they’ve been updated to mix the fashion of the 1800s with contemporary style to give you the best of both worlds.

Whether you’re putting together an 1800s look for a historical cosplay or searching for some old-school inspiration for your next haircut, we’ve got you covered.

Read Next: How Often Should You Get Your Hair Cut?

We’ve chosen nine of the best 1800s hairstyles that still look great today. Some of them are actual 19th-century hairstyles, while others have been modernized. Without further ado, let’s get started. 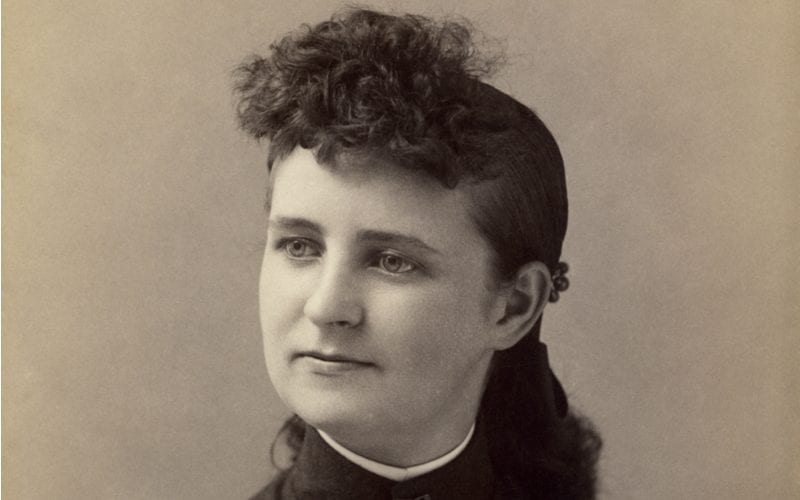 Today, the word “pompadour” is most closely associated with the men’s hairstyle bearing that name, but the pompadour was actually started by a woman. The style was named after Madame de Pompadour, famous for her high-volume hair that she wore brushed up.

The style quickly caught on, and countless variations were created. The women’s pompadour shown here consists of the hair at the front protruding up and away from the head. It’s brushed up but also tousled to maximize volume and create texture.

In stark contrast, the rest of the hair on top is kept rather short and brushed neatly. In the back, the hair falls well past the shoulders and is knotted or tied at the back of the head so the hair can spread as it falls. The part has been used for hundreds of years as a method of styling the hair, and during the 1800s, it was common to see women sporting a middle part with a simple hairstyle. The style shown here simply consists of the hair parted in the middle and kept short on the sides.

While it’s hard to tell from this angle, it’s almost certain that this hairstyle included a bun or chignon in the back, as most women didn’t keep their hair this short in the 19th century. Of course, the middle part can be used as part of many hairstyles.

The size of the part can also be altered to create a different vibe. The wider and deeper the part is, the more noticeable it will be. A smaller part can act more as an accent to a hairstyle if that’s what you’re going for.

To replicate this exact style, you’ll want enough length so that you can tie your hair up in a bun, and the rest is easy. For added accuracy, look up what hair buns in the era looked like. The art lovers in the crowd will recognize this as the famous painting Señora Sabasa Garcia by Francisco de Goya. While this is a distinctive painting, it also depicts a distinctive hairstyle: the cascade of ringlets worn by the painting’s namesake.

You either have to curl your hair or just have naturally curly hair for this hairstyle to work. This style’s focal point is the front of the head, where you must get the curls just right. They should be small but not too tight.

Since this hairstyle is partially covered by the head covering, it’s hard to know for sure what the señora was rocking. However, she likely had curly hair in the back as well, likely tied up in a bun or chignon.

For a more modern take on this style, you can opt for messier ringlets and allow the hair in the back to fall down. You could even implement the ringlet style into a shorter haircut to really allow the curly hair to shine. Here’s an updated version of the middle part we showcased above. While the period style consisted of shorter hair tied up in a bun, this modern twist features long and flowing hair that falls onto the shoulders.

However, the middle part is still the main defining element of this hairstyle, so it’s not too far from the original style. You could make a loose and messy bun with lots of hair sticking out from it for a little more flavor.

That said, if you’re looking for an 1800s women’s hairstyle for cosplay or historical drama/reenactment purposes, this hairstyle will effectively evoke 1800s hairstyles while still being stylish in a more modern sense. Some braiding styles were also common to see in the 1800s. The style we’re showcasing here is technically a combination of two styles. At the start of the Victorian era, it was common to see women form loops with their hair.

This led from the front (around the temple area) to the back, where it would be tucked into a bun, chignon, or similar updo. This hairstyle is almost the same, except the loops are braided for an extra touch of texture.

It’s a modest yet stylish haircut that evokes the 1800s well. There’s also a lot of room for experimentation––you can change how the hair is done up in the back for different looks.

You could also ditch the braids in favor of the more traditional style, but there’s no denying that the braids add a lot of personality to this Victorian ‘do. Here’s another hairstyle that takes a common 19th-century hairstyle and infuses it with contemporary styling touches for a look that’s at home in both periods. The hair’s focal point is the series of curls that hangs down from a bun tied up on the top of the head.

Doing the hair up atop the head instead of in the back gives this a different look to many 1800s hairstyles. Also, the hair has a slight middle part in the front that’s subtle enough to where you might not even notice it’s there.

Even though it’s easy to overlook, it adds a nice amount of definition by creating symmetry. The curls can be styled to fall all around the head or just on the sides.

This depends on the exact look you want. You can also change the intensity of the curls for different results. The looser the curls, the more flowing the style. For a period-accurate style with an extra bit of flair, check out this tied-back style that features lace wrapped around the hair. The lace adds a classy touch that makes this a distinctly 1800s hairstyle.

The style itself is simple yet refined, with the hair being pulled back into sections. There’s also a subtle braid that rests just below the lace. This hairstyle (and the two below) comes to you courtesy of Victoria Shelg.

She’s a brilliant historical costume designer who focuses on period wear from the 19th and 20th centuries. Her approach to exquisitely detailed costumes and decor is worth checking out if you’re into 1800s style. We’ve spotlighted a few curly styles on this list already, but this one stands out for its polished look and old-world accuracy. The curls are large but fairly tight to provide a defined shape to the hair. This is an excellent choice for evoking the earlier half of the 1800s, specifically before the Victorian era. This look blends several 1800s style elements, including the middle part and the chignon. Swooping hair on the sides creates a flowing symmetry that’s reminiscent of the looped braids shown above.

But here the hair has much more presence. As with the other styles, you can change up the elements (such as the type of chignon) to put your own touches on this style.

As part of our guide on 1800s hair, we thought it was prudent to include styles for guys as well. Read on to see average haircuts for men in the 19th Century.

Side Part With Small Quiff That’s right––the quiff styles that are so popular today can be traced back to the 1800s (and possibly even earlier). While this isn’t a quiff by present-day definitions, there’s clearly a sort of proto-quiff going on here.

The hair is brushed up into a small tufted section that resembles a small quiff. There’s only about two inches of hair on top, but the brush up still contrasts against the much shorter sides.

Apart from the “quiff,” this is a standard side part men’s hairstyle. The hair on the sides is trimmed (but not buzzed), and there’s a clear and defined part set into the hair to separate the top from the side.

This was one of the default men’s hairstyles in the 1800s, and yet it still looks great today––the hallmark of a truly timeless hairstyle. Talk about a timeless classic. The side part was just as popular in the 1800s as it is today, so it probably comes as no surprise that the 19th century had several variations of the style. Notably, many men in the 1800s went with more medium-length hair.

So you’d see styles like this thicker, fuller side part. It’s quite similar to the basic side part shown above, but it’s much longer, giving the hair a fuller look. An interesting feature is how the longer sides curl outward toward the front.

In addition, the hair in the front swoops down to create a small fringe, though it’s also brushed up to create an overall wavy texture at the forehead level and slightly above. It’s a simple hairstyle, but there are many small details that all come together to create the finished product. Here’s another old hairstyle that led to many of the trendy men’s haircuts you see today all over Instagram. This is an early version of a side-swept style where the hair is brushed to one side.

This particular style is extremely neat and tidy, as was custom in the 1800s for men’s hair. (It’s likely that a pomade was used to style the hair.) This cut is also quite short, which was another common element of 1800s hairstyles for men.

In contrast to the above style, the sides here seem to be faded. The sides are still longer than many modern cuts, but they’re still noticeably short. To get this result today, you’d probably want to ask for a #5 to #7 clipper setting.

Before you decide on any of these 1800s hairstyles, there are a few things to consider:

Once you’ve made these considerations, you’ll be ready to pick out an 1800s hairstyle that works for you. This list is just a starting point, but we hope it gives you some inspiration for your next cut.